Get fresh music recommendations delivered to your inbox every Friday.
We've updated our Terms of Use. You can review the changes here.

from DIASTRO LP by CULT MUZIC 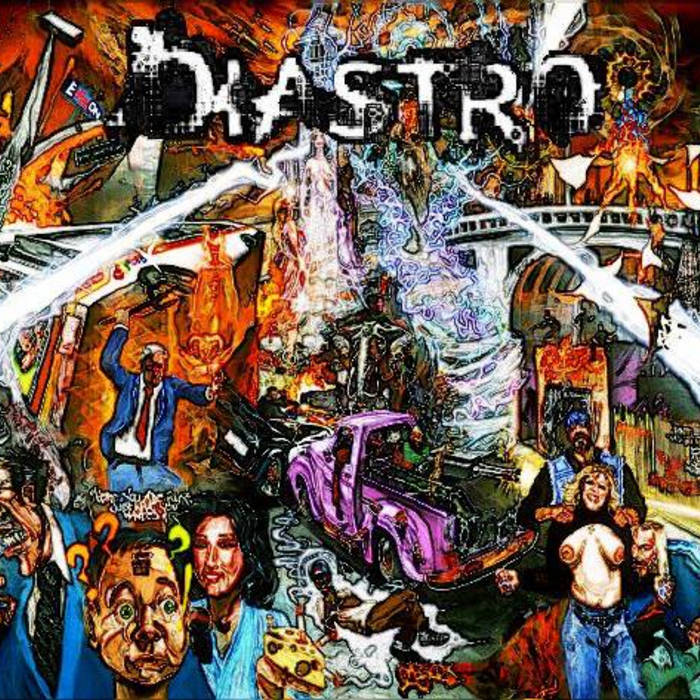 If you're reading this it happened,
but it happened in a flash.
All that's left is this little paper hidden under the dash
cuz' trash piles up when you don't get rid of it
Balloons blow away and you chase it like a kid again
and I'm so sorry to everyone I left behind.
These blues eyes died the day I became colorblind.

A love that I shoved deep down inside
so I'd never find the hurt that I worked so hard to justify
My lust and pride, must've come from my dad.
Fuck that, my sperm donor. Be real; color me bad.
If I had half the things that you had, it' true dad
I wouldn't be where I'm at now and it's so sad.
I'm so glad that it happened that way
cuz I would never be the man that I am today.
So sit up in your tower as the walls start to fall
reflect on messes you made so many ways from your balls.
I'm appalled that a man could do that to his son.
I smear shit to cleanse myself
from all that fucking filth that you've done.
I stumbled out from the shade and walked into the sun,
but your shadow still remains. So I fade out and run.

It all began, down in Squirrel Island Road
I was just a little kid, eatin Ice cream ala mode.
I walked up to the kitchen window and Mom was crying,
She was fed up with all dad's beatin, cheatin and lyin.
She was living a life, but had died inside.
Although she tried to hide it I could see it in her eyes.
She smashed every single dish and threw every single mug.
Then walked away and said "You clean it up you fuck".
She said "Devin, if he every touches us again.
We're packing up, we're leaving, never coming back again".
I made her promise me she meant it
because I knew he was demented.
I watched him drag her up the stairs by her hair, face dented.
On her birthday over blankets if you believe that shit.
He bashed her head on the head board, he said "eat that bitch".
He said "Girls are toys, use them and leave that shit"
He showed me how to turn a life to mess, then eat that shit.
And aint that rich? When he left, he did it again.
We struggled to survive, he signed checks for friends.
While your abused kids suffered, you muffled our screams
While your new kids tousled, we tried to salvage crushed dreams
Tried to mend, end it quickly. It sickly didn't stop.
Therapy until I turned 18, so thank you pops.
Maybe that's the reason I got these anger problems.
I was cursed from the manger and there's no resolving
revolving door of people in and out of my life,
never had a father figure so I disfigured the strife.
Carvin my arms like a pumpkin with Lee's old knife.
Makin any hole that I could with this needle nice.
The weed's alright, the only thing that kept me stable.
When the medications they were feeding me, no longer able.
Incapable of feeling any emotion, so insane.
Daily dreams of dying, tryna blow out my brains
and in my brain, I remember the day
that Curtis Pires told everyone why you really went away.
Everyone started hating me and calling me names,
so I had to place to ever get away from the shame.

Maybe that's why I run when I'm confronted with pain.
It's like my unnerved nerves are preserved the same.
It's like how Justin flipped the board when he was losing a game.
It's like how razors work better cutting against the grain.
I tried to flip it, flip the whole world the bird.
It's absurd, that things like this even occur.
If I can't fight with fists then I'm using my word.
Maybe now my screaming voice can be finally heard.

It all began the day that you made me.
The moment they cut the chord, pulled me out and weighed me
The moment you decided in your mind when it was hazy.
Daddy had a baby and the baby went crazy.
Daddy had a drug problem so this is what he gave me.
Daddy didn't want a baby maybe he was lazy
Maybe he liked fuckin little kids instead of ladies
Maybe he was colorblind of another kind, just maybe

cuz' trash piles up when you don't get rid of it
Balloons blow away and you chase it like a kid agaim
and I'm so sorry to everyone I left behind.
These blues eyes died the day I became colorblind

from DIASTRO LP, released November 12, 2013
Remix of Between The Buried & Me's cover of Counting Crow's "Colorblind"

Cult Muzic Media is an independent record/media company devoted to releasing underground music from all genres.

Bandcamp Daily  your guide to the world of Bandcamp